A guide to Wintering Birds 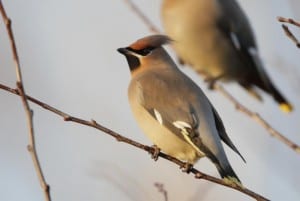 As the autumn migration draws to a close, large numbers of wintering birds can be been arriving on our shores. Lack of food in the colder climes of Northern Europe drives a variety of birds south, and although food is more plentiful here, you may still want to help them out at the bird table, suggests Robin Attrill.

Cold winter weather isn’t normally a problem for birds providing they are well nourished, and can find plenty of food.  A bird table or feeder will attract hungry birds to your garden, but make sure it’s topped up regularly so the birds don’t have a wasted visit. Also, provide water for drinking and bathing if possible, remembering to break the ice on especially frosty mornings.

November & December:  When you are out and about on our Island during November and December, keep an eye out for this selection of common and rarer birds highlighted by The County Bird Recorder. Large flocks of brent geese and a selection of ducks including pintail, wigeon and teal appear on the Island’s wetlands and estuaries such as Newtown Creek. Some less common ducks, like the shoveler and gadwall are better seen at Brading Marsh RSPB reserve, whilst others such as the red-breasted merganser favour the Solent. Further arrivals include woodcock from continental Europe, and finches such as siskins and redpolls which favour the Alder and Birch woods along the Medina and Yar valleys. A very special species that sometimes graces our shores is the waxwing. This beautiful bird leaves its normal haunts in Siberia and Scandinavia when food is scarce, occasionally turning up in great numbers, feeding on berried shrubs in gardens and urban areas.

At the Bird Table:  Many wild birds venture into gardens seeking out bird tables and feeders as their natural food supply declines.  Some are common residents such as blue tit, great tit, greenfinch, chaffinch, and the great spotted woodpecker, which is partial to peanuts.  Rarer species like the brambling from Scandinavia, related to the chaffinch, may visit feeders from time to time when it’s favoured food (Beech nuts) are scarce. If you’re lucky, an added bonus visitor to bird tables here is the red squirrel. So, if you haven’t done so before, why not put food out for the birds this winter, and see what turns up?