December treats from the garden and beyond 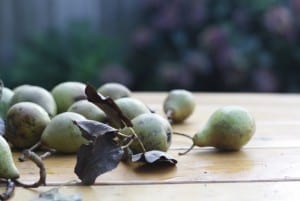 As winter approaches, we are less inclined to spend time outdoors, choosing the cosy warmth of our homes over the increasingly chilly countryside. But for those willing to brave the elements, there are still treats to be found, finds Anna Pocock.

This year’s wild harvest is the most abundant in nearly a decade, so make the most of its edible treasures while you can. Sloes, figs, quince and mushrooms are on their way out now but the hedgerows will still yield a legion of berries, including rosehips, haws, rowan and juniper berries throughout November and even into December.

Rosehips are particularly prolific and I challenge you to walk through any part of the Island’s countryside without spying these cheery, red berries laced through the hedgerows. But despite their attractive appearance, rosehips can be challenging to pick, thanks to their viciously thorny branches. If you plan to collect some, do go armed with gloves.

The hairs inside the hips are an irritant so, rather than splitting the hips open to reach the fruit inside, you may find it easier to boil the hips whole and extract the fruit as a juice. To do this, cover the rosehips in twice as much water and bring to the boil with the same amount of sugar as hips (e.g.: 150g hips: 150g sugar: 300ml water). Simmer for 20 minutes or until the hips have softened.  Mash into a pulpy mixture and pass through a muslin or fine-meshed sieve. You can use this fruity syrup over ice-cream, in cakes and puddings or just as a vitamin-rich tonic.

Closer to home, garden fruits are also in plentiful supply. According to the Royal Horticultural Society, 2013’s exceptionally cold spring and hot summer helped produce a ‘near perfect’ apple harvest. Pears too are in rich abundance and gardeners may find they have such a glut of fruit that it can be hard to know how best to use the excess. If you pack the fruit carefully, you can store it over the winter months to enjoy a regular supply of the raw fruit. Another delectable idea is to pickle pears and eat them alongside a cheese board or with cold meats.

2. Pour the vinegar into a large saucepan, with 250ml water.  Add all the pickling ingredients, except the pears.

3. Bring the mixture to a boil, then add the pears gently and simmer for 15 minutes, until the pears are just tender.

4. Lift the pears out with a slotted spoon and place into a sterilised 1.5litre jar.

5. Boil the poaching liquid for another 5 minutes then pour this over the pears and seal the jar.