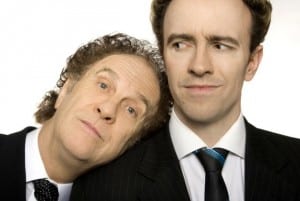 Ludicrous story lines, farce, men dressed as women and happy endings. Otherwise known as the Pantomime. At this festive time of year, who better to meet than Keith Simmons, the man who brings our most entertaining of Christmas traditions to life?

Cath Ouston has been talking to one of the most prolific and successful pantomime writers, directors and performers in the UK today.  For the last 47 years Keith Simmons has been bringing a smile to the nation’s faces, making people laugh, frequently to the point of tears. But his isn’t necessarily a face or a name that you would recognise, as a lot of his career has been spent writing pantomimes, TV shows and material for other artists. During that period, he has worked with some of the most legendary names in British comedy: Arthur Askey, Ken Dodd, Norman Wisdom, Max Bygraves, Les Dawson, Danny La Rue, Eric Sykes, Des O’Connor, Brian Conley, Nicholas Parsons, John Inman; as Keith puts it “guys who knew about warmth, timing and act construction”.

Keith has been involved with Pantomimes since 1968 but it wasn’t his first choice of career. He started out as a singer, as one half of the Simmons Brothers with his brother Alan in 1966. Their first record was produced by Tony Hatch (who wrote Downtown amongst many other hits) and featured Jimmy Page as session guitarist – before his days of fame with Led Zeppelin. But despite such impeccable connections their record wasn’t the success they had hoped and eventually they turned their natural ability to make others laugh into a career. Keith was the comic to Alan’s straight man – the perfect formula.

They spent their first summer season performing here on the Isle of Wight when he met his future wife Fran Gleeson whom he married in 1968 at St Mary’s in Ryde. This proved to be a lucky year for Keith as later that same year their agent got them an audition at the Theatre Royal in Bath to perform in Puss in Boots. This was their introduction to panto and Keith has been hooked ever since.

From those humble beginnings, Keith and Alan continued to work together across the comedy spectrum until Alan decided to retire from performing with Keith in 2002. At this point they went solo…but not for long. “Once a double act, always a double act,” says Keith, and so he formed a new partnership, ‘Simmons and Simmons’ with his son Ben; writing and directing not only pantomimes but a variety of other entertainment shows as well. ”Ben provides that younger, more modern feel as he brings in references from popular culture and the press today. We bounce ideas off each other and basically have the best laugh. Some days we start with the aim of completing three scenes and barely get through one because we’re laughing so much,” describes Keith.

To date Keith has written around one hundred and thirty pantomimes; some years getting involved with as many as eight performances around the country at one time. So it is with this illustrious career in mind that I sought out the man himself to take a peek behind the scenes of one of the great Christmas traditions, the Pantomime.

KEITH, WHY DO YOU THINK PANTOMIME IS SO IMPORTANT?

“It’s important on so many levels. It introduces kids to the theatre, it captures their imagination and makes them laugh. They then become the theatre goers of the future. Plus pantomimes have a strong moral storyline, good always triumphs over bad; and they get their message across in an entertaining way. For the adults it’s the perfect escapism from the realities of day to day life. It’s essential that punters leave the theatre laughing, especially in this day and age with so many problems and financial worries.”

“Pantomime is derided a lot in the business but it really is an art form if it’s done properly and its popularity means that it’s been crucial for keeping regional theatres going. A good pantomime can subsidise a whole year for a theatre allowing them to diversify and also put on more cultural and specialist pieces too.”

SO WHAT MAKES THE PERFECT PANTO?

“There has to be something for everyone, the whole family has to be entertained at the same time, on different levels. It’s like producing a full scale musical now. The music has to be very current, the faces instantly recognisable, the women glamorous, the dance routines slick and professional. Kids today expect a lot, they’re so used to the highly produced performances and special effects on TV and the instant draw of computer games that you have to capture their attention and fight to keep it the whole way through. It’s great because it really keeps you on your toes. You have to add some wow and that usually means special effects and stunts of one sort or another such as making Peter Pan fly. The special effects have to be really strong to convince the kids!”

“Names help to put bums on seats. It’s very trendy for young actors and pop singers to appear in panto now which is a godsend. Over the years I’ve worked with some incredible and really unexpected people. Wolf from Gladiators was superb. As soon as he walked on stage the whole audience went mad. Larry Lamb (from East Enders and Gavin and Stacey) was superb as Captain Hook with George Sampson (from Britain’s Got Talent) as Peter Pan. They were both fantastic to work with and really popular with the crowd.”

“Obviously with each panto there is the basic story line to follow but then our job as writers is to factor in both the theatre – it’s layout, restrictions and technical capabilities; and then of course the performers. You need to restructure it and write it around them. For example we’re writing two performances of Jack and The Beanstalk this year: for the Assembley Rooms in Derby with Cheryl Ferguson (Heather from East Enders) headlining as the Fairy; and in the Weston Playhouse in Weston Super Mare with George Sampson headlining as Jack. So they need to be written with extra emphasis put on their characters. The Fairy doesn’t ordinarily appear in many scenes but she has to in this one so new lines and references need to be added around her. For George, he’s playing Jack so that’s easy enough but he’s known for being a phenomenal dancer so it’s important to incorporate extra dance routines.”

YOU’VE WORKED WITH SOME INCREDIBLE NAMES OVER THE YEARS, ARE THERE ANY THAT REALLY STAND OUT FOR YOU?

“There’ve been so many great performers that I’ve had the privilege and pleasure of working with and some of them many times over. I’ve worked with some outstanding pantomime dames, Danny La Rue was one of the best, and John Inman was just incredible! He played Mother Goose for one of my pantos and he played it just the right way transforming himself from old lady to a glamorous young woman, perfect!”

“Well we’re busy all year round, not just with writing pantos. We have ‘The Get Happy Show’ in Margate again next summer and hopefully I’ll be back to perform on the Island again before too long. Plus more panto of course! We’ll keep evolving it to suit the audience. It’s been a funny old business and I still love every minute of it.”