Me and My Boat – Mark Young of Sally Water Taxis 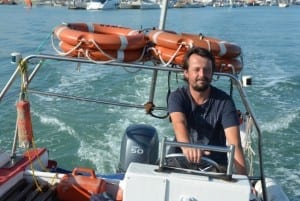 Born and bred on the island, Mark Young has worked on the River Medina for the last 10 years. He runs Sally Water Taxis, ferrying people around the river at all hours, come rain or shine.

How did you get into boats?  When I was a kid we had fishing boats and my dad worked his whole life at sea. He also drove club launches and water taxis in Cowes too, so in 2004 when the business became available I followed in his footsteps, it just felt right.

What boats do you own?  I’ve got a mixture of boats including 2 classic old ferries, which are my passion. Nomad, built in 1934, was requisitioned as a Liberty Boat during WWII and transported troops from warships moored in Scapa Flow, Scotland.  She was sunk by a German Messerschmitt, but they brought her up, repaired her and she carried on, eventually returning to work as the Torquay-Babbacombe ferry. Log books show she had carried well over a million passengers before I bought her in 2006. When I drive her, I’m standing in the same spot that people were standing in with bombs dropping around them, it’s very humbling.

Best thing about working on the water?  I like the variety of people. It’s nice doing something in the community where you get to know everyone and chat with people from all walks of life. Plus, if it’s quiet I can go fishing, swimming at Osborne Bay or cruise to the Hamble.

Ever wanted to give it up?  On my very second shift I was saying goodnight to passengers when one of them walked off the wrong side of the boat. I never saw it coming. I’d obviously been watching the pontoon side making sure people didn’t trip up and I missed him completely. I dragged him out and he was fine. It certainly sobered him up. It made me question if I really want to do this and I considered never coming back. Thankfully it’s never happened since but even now it still haunts me, knowing how unpredictable people can be. But I’m still here and working on the water just feels right to me. I think I caught it from my Dad. Even when it’s pouring with rain, icy and horrible, something in my DNA keeps me doing it.