New shoes at The Hambrough 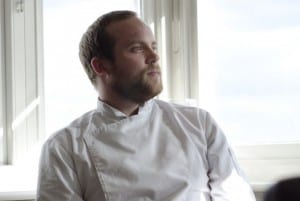 Darren Beevers has had an illustrious career, but what he relishes about coming to the Island is the immediate connection between product and plate. He talks to Roz Whistance.

If there is any suspicion that the Hambrough might be reeling a little from the departure of the chef who put it on the foodie map, that quickly disappears when you meet new Head Chef Darren Beevers. He is self assured and quietly jocular: and he’s quite ready to bat away the inevitable question about having big shoes to fill.

“I’m not worried about shoes! They are big of course: Robert [Thompson] has done great things for the Island, he’s produced beautiful food. But I’m really enjoying the opportunity to bring my ideas here.”

Darren and his sous chef Danny Perjesi have just arrived on the island when we meet. As Darren talks you’re aware you’re in the presence of a very happy man: his surroundings are shaping the food he produces.

“All my fish comes from here,” he says, looking through the bay window of the Hambrough’s elegant lounge, which frames an uninterrupted view of the sparkling channel. “We have local fishermen who go out after their day-jobs and bring in fish that’s so fresh! I can’t think of anywhere else that would happen.”

Certainly not in London where Darren’s most recent role was Head Chef at the Michelin starred Club Gascon. In the city, he says, you speak on the phone, a box of veg or meat arrives and, he says, “you don’t appreciate the dedication and passion that goes in to all the produce”.

He rejoices in the connection he now makes between product and plate. Now his veg grower is in Apse Heath and he knows all his meat suppliers personally. “We’re only a 30-cover restaurant and because of that we can sustain that standard of using only Island meat.  Our butcher hangs the veal or pork for us and we do our own bacon, sausages, everything.”

Darren’s passion for food was rather slow burning. At 13 he switched from earning money with a paper round to helping out in a Chinese restaurant, peeling prawns or potatoes. Later a job washing up in a nursing home led to him making food – “and I realised I really liked it,” he says. “I took the leap and moved to London, finding one of the nicest restaurants I could, which was Chez Bruce.”

He hadn’t realised what a huge leap it is to work in a Michelin starred establishment – “I went in there head first!” – but he didn’t look back. His CV is a tour of gastronomic excellence: – after Chez Bruce (one star) was The Capital (two star), Le Poussin with Alex Aitken in the New Forest (one star), Restaurant Gordon Ramsey (three star) and then Jason Atherton’s Pollen Street Social (one star).

He has been hoping to add to the team of four an apprentice, but so far he hasn’t found one suitable. When pressed he admits to being disappointed that unlike himself when he was starting out, potential recruits haven’t risen to the challenge. “Of course it’s a little frustrating because there’s a standard and a job to do.  Myself and Danny have cooked in quite a lot of places and we are happy to share our knowledge and develop a young chef.”

He’s seen plenty of chefs who aren’t so patient. “I’ve seen pots and pans thrown, people being burnt, heads hit against microwaves – the works. And that’s not how I want to run a kitchen.  If you can’t control yourself you can’t manage your team. So if an apprentice does come here they’ve got a great opportunity.”

For his part he freely acknowledges how he has been shaped by the knowledge and ideas of chefs he’s been lucky enough to work with. Darren’s food, based on a three colour, three flavour principle, is as much a visual work of art as a gastronomic delight.

What do you do to relax?  I walk my British Bulldog puppy, Winston. And I love riding my motorbike, going for a Sunday ride with my girlfriend, Jo. My family is only in New Milton and my mum comes over – though I think to see the puppy more than me!

What do you eat for breakfast?  Porridge. And a big cup of Earl Grey tea.

Any foods you don’t like?  Very fishy fish like salmon and mackerel. And I don’t particularly like the taste of oysters, so to balance the flavour to my taste I make an oyster ice cream.  I serve it with a lamb dish – lamb with seaweed, carrots and oyster ice cream.

Anything you won’t eat?  Not really. I’ve tried everything pretty much.

What does style mean to you?  Style is individuality, doing things yourself. My food style is to try not to have more than three colours – and three flavours – on a plate. It’s a principle in art, too, so it looks very pretty, it’s easy to plate and you’re not muddled with your taste.