Zoe Stroud and the Cowes WI 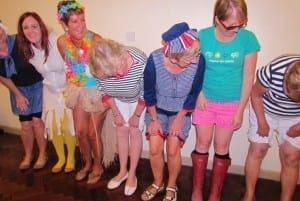 Zoe Stroud, founder and President of Cowes WI was the youngest ever branch president at the time she set it up aged 31.

Zoe first became interested in joining when she saw it mentioned in the ‘Things You Must Do’ section of the now discontinued Joules magazine. The WI was originally a rural organisation so when Zoe called WI House in Newport they told her there wasn’t a Cowes branch. She was disappointed but they told her that if she could find 5 other people, that was enough to start her own group! She asked around and within a few weeks 65 ladies expressed an interest in attending. She formerly approached WI House and applied to open Cowes WI becoming one of the youngest woman ever to do so. In their first meeting back in 2010 47 ladies signed up and since then they have consistently had 45-50 at each meeting.

What makes Cowes WI different is the unusually young age profile of the group which ranges from women in their 20s to their 70s. The average age is around 40 years old though and since the group formed there’s been 1 wedding plus 3 babies have come along with another one its way. People go to Cowes WI from all over the Island – Ryde, Lake, Newchurch, Newport as well as Cowes. Some are dual members and attend two different meetings. They love it for the young vibe and social nature of the group.