Rumpy Pumpy – A case of tea and crumpets 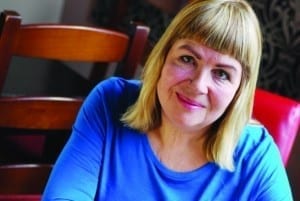 The much anticipated premier of ‘Rumpy Pumpy’ is coming to the Apollo Theatre in Newport from 6th – 9th March 2014! This new musical written by Island Author and Screen Writer Barbara Jane Mackie is billed as “a female Full Monty”.

This comedy drama brings to life the true story of two ladies from the Hampshire Women’s Institute, Jean Johnson and Shirley Landels, who started a campaign to decriminalise prostitution and brothels in the UK. Based primarily in a Portsmouth based brothel, it follows the exploits and challenges faced by brothel owner ‘Holly Spencer’, her working girls, their clients and the police who are hot on their trail. Throw in the two ladies of the WI and what results is a warm hearted story of women trying to survive the recession; and a story of bravery, farce and hypocrisy ensues creating a very British comedy.

Jean and Shirley’s campaign was prompted by the horror they felt at watching the news coverage of the ‘Ipswich Murders’ when five working girls were murdered in 2006. This led Jean and Shirley to investigate the prostitution scene in their local area and they were so appalled at the conditions they found the girls working in that they felt the need to do something to help.

Their eventual aim is to decriminalise prostitution thus allowing well-run brothels to be established, getting the women in off the streets and providing protection for the working girls and clients alike. The ladies began a worldwide search to find the perfect brothel to create a prototype for the UK. In New Zealand they finally found the solution that would form the basis of their campaign recommendations. One where women run their own brothels known as ‘S.O.O.B.’s. (Self Owner Operated Brothels) and are able to control the conditions they work in.

The story was originally highlighted in a Channel 5 documentary ‘The Ladies of the Hampshire WI and their search for the perfect brothel.’ “This is when I first became aware of the campaign,” explains Director Barbara. “I met with Jean and instantly felt that this was a story that needed to be shared. I started to research it and visited a couple of brothels in Stockport and Southport. I even spent some time working undercover as a receptionist in the one in Stockport. That was a real eye opener I can tell you! What struck me most though was that all the women working there had other jobs as well. There were policewomen, teachers, nurses and bank clerks all with one thing in common: a need to earn extra money to pay the bills and support their families. That’s what really drove me to write first a film treatment and then, once that was completed the musical as well. I wanted to tell the women’s’ stories.”

Rumpy Pumpy is on at the Apollo Theatre, Pyle St, Newport, Isle of Wight, PO30 1JT

Tickets cost £10 or £6 for concessions and all proceeds go to the Motor Neurone Disease Association (IOW Branch).